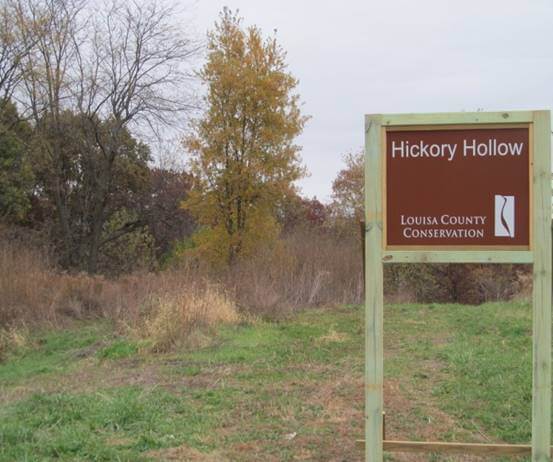 In 2014 River Products Company was looking to expand their Klein Quarry location in the Iowa City area.  The expansion had the potential to impact 14.5 acres of Indiana Bat habitat due to the loss of timber. The company’s goal was to find a timbered area that would fulfill mitigation requirements for the Indiana Bat.  A search was started to locate 29 acres of timber property consisting of mature trees with loose bark.

The search ended when they found 34 acres of land up for auction in Louisa County.

29 of the 34 acres would enable River Products to fulfill the goal of providing Indiana Bat habitat with restricted development under the Corps of Engineers 404 Permit.  If successful in acquiring the property, the remaining five acres would be donated to Louisa County for future public use.  River Products was successful in offering the winning bid.  The process was more expensive than anticipated costing in excess of $100,000.  But it saved a timbered area scheduled to be logged and provided the Indian Bat habitat they needed.

Once the property was purchased, River Products next step was to clean up the entire 34 acres.  The previous owners and neighbors had treated the site as a landfill for tires, shingles and more, so another $30,000 was spent cleaning, grading and posting signage at the site.

The decision was then made to deed the entire 34.12 acres to the Louis County Conservation Board.   The Board will manage the property according to the 404 permit for Indiana Bat Habitat.  Since the area is steep, timbered, and has a creek running through it, public voting on Facebook named it “Hickory Hollow Wildlife Area”.

In September, the Louisa County Conservation Board presented River Products Company with the “2015 Friend of Conservation” award.  This prestigious award is given to an individual or business that has contributed greatly to conservation efforts in Louisa County.  In accepting the award, Todd Scott, VP and General Council for River Products,  told the group, “I believe Hickory Hollow is a great example of how industry and the environmental groups cannot only co-exist, but collaborate for the greater good of both.’

Through the efforts of River Products Company, the citizens of Iowa now have another area where they can enjoy Iowa’s natural surroundings.